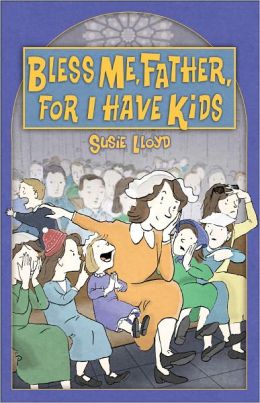 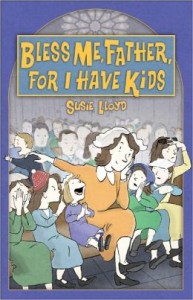 We Catholics can sometimes take ourselves a little too seriously. God has a sense of humor, however, and so should we. Susie Lloyd will have mothers, especially homeschooling mothers, laughing out loud with her latest offering Bless Me, Father, For I Have Kids

(Sophia Institute Press, 2009). Susie Lloyd is a forty-something homeschooling mother of seven and a member of the Byzantine rite.

Each of the chapters of “Bless Me, Father, For I Have Kids” can stand alone as a quick humor break. Lloyd tackles many topics that will have seasoned mothers nodding, saying “Oh, yes, I have been there!” Who among us hasn’t been covered in vomit, struggled to keep children quiet in Mass, endured a road trip, faced the home haircuts vs. going to the barbers conundrum, or dealt with music lessons? For those who homeschool (which, one has to admit, makes life even more interesting!), there are even more things to laugh about. I brought this book to my homeschooling group and read a passage out loud because I thought it was so good. I plan to share this book with them so that it can make the rounds and they can all enjoy it.

Some of the funniest parts of this book concern what the world thinks of homeschooling moms as opposed to the reality which only fellow homeschoolers can fully appreciate. In her chapter, “It’s a Nerd! It’s a Saint! It’s Supermom!” Lloyd reflects on how others used to view homeschoolers with suspicion. Now, however, “the American public has changed its collective mind. It now thinks that homeschoolers can indeed do it, and do it well. All of it. We know because it exclaims, ‘How do you do it all?!’” She then goes on to explain how she uses triage as a management technique. She tells how she once asked one “put-together” homeschooling mother she knows how she did it all, and they mentioned something about a “schedule.” Lloyd responds, “I was going to look it up, but I couldn’t find a dictionary. Weeks later it turned up in a foxhole in one of the girls’ rooms. . . .If friends such as the family just mentioned drop by (which they rarely do because it’s not on the schedule), it is best to focus on the point of entry. Do not attack the guests. Attack the clutter.” Yes, I can relate!

Her chapter, “Homeschool Unceasingly” contrasts what the world thinks homeschooling looks like versus life in her home. Most people think of homeschooling in terms of the only model of education that they know – the classroom.

Let’s see, according to this picture, we should have one large blackboard, one overhead projector, and several assorted classroom-size pets: goldfish, salamanders, and possibly a tarantula. For décor, we have various instructional posters, such as an ABC scroll . . .A bell goes off at 8:30 a.m., at which time all normal family activities cease. . .Students then file in punctually for the raising of the flag (you will need a cathedral ceiling) and the Pledge of Allegiance. School commences. Each student (in uniform) sits at a little desk. . . .When he wants to speak, a student must raise his hand, even if he is the only one in the class. (If he gets the answer wrong, he snickers and whispers ‘duh’ to himself. If he gets in right, he secretly envies himself and hits himself in the back of the head with a spitball.) If it were really like this, I wouldn’t blame the neighbors for calling in an exorcist.

“Bless Me, Father, For I Have Kids” is a hit. I recommend it for anyone who wants to have a little fun laughing about this vocation of Catholic motherhood.