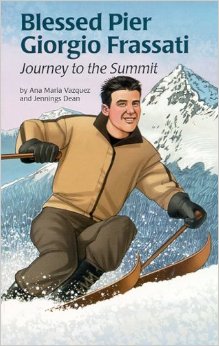 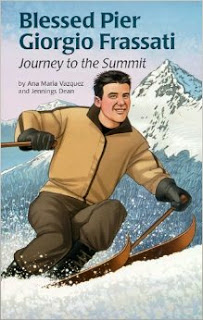 One of the great joys of homeschooling is learning right along with your children. This past quarter, we have been reading “Blessed Pier Giorgio Frassati: Journey to the Summit” by Ana Maria Vazquez and Jennings Dean. Part of the Encounter the Saints Series published by Pauline Media, this particular book featured a saint I had never heard of. It is always a pleasure to be introduced to one of heaven’s residents and this book was a true delight.

Pier Giorgio Frassati lived only twenty-four years, from 1901 – 1925, but he packed a lifetime of work and service into that short period on earth. Born into a wealthy Italian family, he was expected his father’s footsteps as owner and editor of one of Italy’s leading newspapers. Instead, he chose to forge his own path, and while excelling at sports and applying himself to his studies, focused on living a life of service to others. Even as a teen, he gave generously to the poor and chose to keep his good deeds secret. He became a third-order Dominican.

He died from polio and, much to his parents’ surprise, hundreds of people they didn’t know mourned his passing. Everyone seemed to have a story about Pier’s generosity. He was beatified in 1990.

This book is designed for young people, but as an adult, I enjoyed it just as much as my children did. Blessed Pier Giorgio is an inspiring role model for teenage boys.