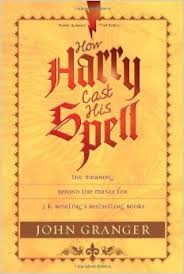 How Harry Cast His Spell: The Meaning Behind the Mania for J.K. Rowling’s Bestselling Books
by John Granger
Carol Stream, IL: SaltRiver, 2008

Harry Potter mania has largely subsided, but many young people still read and enjoy these books and they are destined to become classics. In addition, with the release of an eighth book this summer, no doubt many people will be rereading or reading the first seven books for the first time.

Whenever one starts talking about Harry Potter in Christian circles, one can be opening a can of worms. People tend to have strong feelings about these books, either for or against. Those against argue that the books promote witchcraft and new age spirituality. These people have likely never read the books. Those who have read them argue for their inherent Christian symbolism, which if you read all seven books, pretty much smacks you over the head.

When John Granger’s children first wanted to read Harry Potter, he told them he had to read them first. He had heard of the controversy and wanted to be careful what his children read. After reading the book, he not only allowed his children to read these books, he required them to do so. Granger went on to study the books and to become a veritable expert in all the symbolism in Harry Potter.

When I read the Harry Potter books to my own children, I was amazed by the brilliance of J.K. Rowling’s mind – the way the whole series was interwoven, every character important, every word mattering. After reading this book by John Granger, that amazement has only grown. I consider myself fairly well-educated and thought I had picked up on a good amount of the symbolism in these books. I didn’t even come close.

J.K. Rowling studied a variety of classical and modern languages, is steeped in knowledge of English classics such as C.S. Lewis and Jane Austen, and immersed herself in the study of esoteric and literary alchemy prior to writing these books. She is also has a Christian background, having been confirmed in the Anglican Church. All of this bears fruit in her writings.

Granger examines the Christian symbolism in each book and in the series as a whole. This is not as easy read, but it is incredibly well-researched and fascinating. Even if you don’t understand everything in these pages, it will give you a great appreciation of what went into writing these books and the Christian foundation they represent.

I actually had my teen boys, both Harry Potter fans, read this book as part of their homeschool lessons this year. I heartily recommend it to anyone who is interested in learning more about the symbolism in these books, and to anyone who thinks that the Harry Potter books shouldn’t be read by Christians.