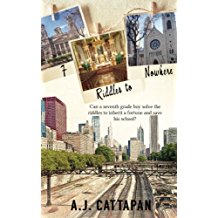 7 Riddles to Nowhere by A.J. Cattapan

Seven Riddles to Nowhere is a wonderfully charming book, perfect for older elementary students and middle schoolers or for anyone who enjoys a beautifully written, hard-to-put-down story. The main character, Kam, who suffers from selective mutism, finds himself on a mission to save his beloved Catholic school from closing. This goal leads him on an adventure through Chicago deciphering riddles at beautiful churches, while avoiding the school’s bully along the way.

The characters of Kam and his supportive friends are so enjoyable that I couldn’t help but root for them as they made their way from church to church. Cattapan did an amazing job of not only bringing her characters to life but also describing Chicago in a way that the city practically became another character in the book. I also loved the element of the faith based riddles the kids had to solve.

This is a fantastic story of self-sacrifice, for the good of others, that delivers a beautiful message – kids can make a difference.

For where your treasure is, there your heart will be also. Because of a tragic event that took place when he was five-years-old, seventh grader Kameron Boyd can’t make himself speak to adults when he steps outside his home. Kam’s mom hopes his new school will cure his talking issues, but just as he starts to feel comfortable, financial problems threaten the school’s existence. Then a letter arrives with the opportunity to change everything. Kam learns that he and several others have been selected as potential heirs to a fortune. He just has to solve a series of seven riddles to find the treasure before the other students. If he succeeds, he’ll become heir to a fortune that could save his school. The riddles send Kam on a scavenger hunt through the churches of Chicago. But solving them won’t be easy. With the school’s bully as one of the other potential heirs, Kam and his friends must decipher the hidden meanings in artwork and avoid the mysterious men following them in a quest to not only keep the school open, but keep Kam’s hopes for recovering his voice alive.

Purchase 7 Riddles to Nowhere on Amazon