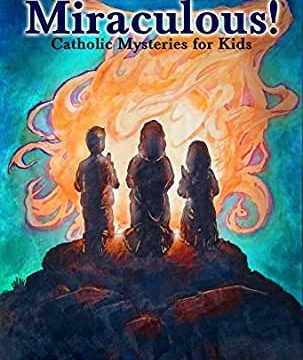 Heavenly Hosts; Eucharistic Miracles for Kids and Miraculous! Catholic Mysteries for Kids, both by Kathryn Swegart, O.F.S., were written to introduce children to some of the miracles that have taken place in the history of the Church, but these books are actually great for all ages.

It can be hard to believe in the Real Presence of the Eucharist. After all, after transubstantiation, the bread and wine still look the same. We take it on faith that the bread and wine become the body and blood of Christ, but how can we be sure? God knows that we humans like to have tangible proof of things that are hard to believe and understand. Heavenly Hosts tells of various Eucharistic miracles in which the veil has been lifted and the consecrated bread and wine have been shown to be the true body and blood of Jesus.

These include a miracle in Lanciano, Italy in the 8th century in which the bread turned to flesh and the wine turned to blood. A similar miracle took place in 1994 Buenos Aires. In this case the bloody flesh was scientifically tested and found to be part of a human heart that was alive at the time that the sample was taken. There are several other miracles included in which the power of the Real Presence in the Eucharist has been made manifest.

Miraculous! includes stories of all sorts of miracles. Learn about the house of the Blessed Virgin Mary which was moved by God from Nazareth to where it now resides in Loreto, Italy. Discover the mystery of the creation of the image of Our Lady of Guadalupe on St. Juan Diego’s tilma. Relive the moment when the Shroud of Turin was first photographed, revealing the Holy Face of Jesus in the negative.  The back of the book includes additional scientific evidence about several of the miracles included in the book.

Each of the stories in these wonderful books is short (a few pages) which makes them perfect for reading aloud as part of morning time, religion class, or before bed. Your whole family will love and learn from these miraculous stories. They might even help you and your children grow in faith.