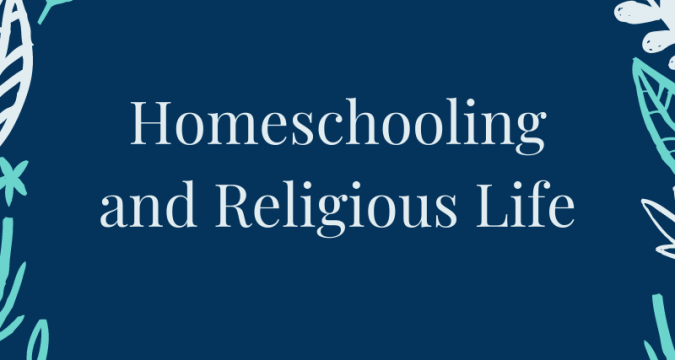 Catholic homeschooling is a way to educate children in the virtues and foster genuine Catholic culture at home. Many Catholic families choose it for their children because they notice how public education is more like indoctrination in secular humanism than education, and good Catholic schools are too few and far between.

But it was not always this way. Daily life used to revolve around religion in Catholic homes, where the Angelus would be prayed at noon and children would be taught stories from the Bible and the lives of the saints as regularly as they watch TV shows today. The Faith was a way of life, and living a life outside of the home where children learned things different than what their family and village taught them would have been seen as unnatural.

St. Therese of Lisieux compared souls to flowers in a garden. She said some are lilies, others are violets, and others are roses. But no matter what kind of flower someone is, no one could exist without roots. A person’s family, along with the family’s customs and values, are his or her roots. Before modern times, to uproot a child from the natural habitat in which he or she was born and raised in the most tender years of life would have been seen as cruel and illogical. Moreover, it could cause the child to see his natural home as foreign.

For a good hundred years at least though, families have been sending their children off to schools where they could learn lessons contrary to what they learn at home. Only in recent decades has the old way of educating children re-emerged.

According to the Coalition for Responsible Home Education, the modern homeschool movement began in the 1970s with John Holt, who believed that formal schools’ focus on rote learning created an oppressive classroom environment designed to make children compliant employees. But homeschooling is better understood from a Catholic perspective. Reflecting the way Catholic homes were structured for hundreds of years, the Catechism of the Catholic Church teaches that parents have the first responsibility for the education of their children (CCC 2223). The Catechism goes on to say that parents:

bear witness to this responsibility first by creating a home where tenderness, forgiveness, respect, fidelity, and disinterested service are the rule. The home is well suited for education in the virtues. This requires an apprenticeship in self-denial, sound judgment, and self-mastery—the preconditions of all true freedom (ibid).

In a similar way, Franciscan brothers adopt a way of life built on virtue and love of God. These religious communities are allies with Catholic homeschooling households because they also strive for a better society built on faith and virtue. The Knights of the Holy Eucharist, a community of Franciscan brothers, aim to build a home akin to that of a wholesome Catholic family, a home “well suited for education in the virtues.” Their spirituality webpage reads:

For a young man raised in a Catholic home, communities like the Knights of the Holy Eucharist are the perfect next step after homeschooling. It is indeed a great commitment, a lifelong commitment, to dedicate your life to the community and to the Franciscan way, but the rewards are eternal. If you or someone you know feels called to become a Franciscan brother—vowing to live a life of poverty, chastity, and obedience—the Knights invite you to give their brotherhood a closer look.

To learn more about the Knights, visit, Knights.org. The brothers invite those who are seriously considering a vocation to their order to visit them in Waverly, Nebraska. Any prayer and financial support you can provide for the community is also gratefully received. You can reach them via their contact page or their Facebook page, and can donate here.

David Kilby is a freelance writer from New Jersey and managing editor of Catholic World Report.