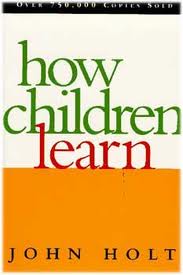 It’s almost embarrassing to admit that I have been homeschooling for six years and never read a book by John Holt. Considered the father of modern homeschooling, his thought has contributed much to the homeschooling movement and while he was primarily in favor of unschooling, everyone who homeschools today owes him a debt of gratitude for all the work he did to make homeschooling legal and accepted. And so, I recently set out to correct this deficit in my homeschooling education.

I started with How Children Learn

. Originally written in 1964 and revised in 1983 (Holt died in 1985), it contains Holt’s observations of children learning. He was a teacher who began to realize that there was something fundamentally wrong with the school system. He set out to watch young children and see how they picked up new information because young children learn an immense amount in their first few years of life, largely through observation and imitation. He then put forth the theory that children would continue to learn without traditional school if given the opportunity to do so.

Perhaps the key passage of the book is the following:

Timetables! We act as if children were railroad trains running on a schedule. The railroad man figures that is his train is going to get to Chicago at a certain time, then it must arrive on time at every stop along the route. If it is ten minutes late getting into a station, he begins to worry. In the same way, we say that if children are going to know so much when they go to college, then they have to know this at the end of this grade, and that at the end of that grade. If a child doesn’t arrive at one of these intermediate stations when we think he should, we instantly assume he is going to be late at the finish. But children are not railroad trains. They don’t learn at an even rate. They learn in spurts, and the more interested they are in what they are learning, the faster these spurts are likely to be.

I can attest to this with my own children. Isaac (now 11) learned how to read young. One day when he was four he picked up a book and started reading. I did nothing to teach him. David (now 12 1/2) struggled with learning to read. Truly, he couldn’t read fluently until he was about eight. I’m sure had he been in school, he would have really struggled. Now, there is absolutely no difference in their reading ability.

Neither one of them wanted to read books by themselves until they were about eight or nine. They liked to have me read to them. Their interest level was higher than their reading ability. It wasn’t until it caught up that they began to devour books. While Isaac reads more quickly than David and can read a long book in a day, the two are both avid readers.

Another example – Isaac made his sixes backwards for years. I would point it out to him, but it didn’t matter. Those sixes were still always backwards. Last year (2012) when we started school in September, he took out his math book and did his problems and wrote all his numbers correctly. In June he didn’t, and to my knowledge, he had not written a number all summer, but something must have happened in his brain over the summer.  He just “got” it.

It can be hard and nervewracking waiting for those connections to happen, especially when the “educational experts” say that these skills should be learned at a certain age. And there are certainly special situations where there are true learning difficulties, but in many cases, what a child needs is the ability to learn at his or her own rate. We have eighteen years to get them ready for college (if that, in fact, is even their goal). There is time to allow for differences in developing brains. That is the key point of Holt’s ideas.