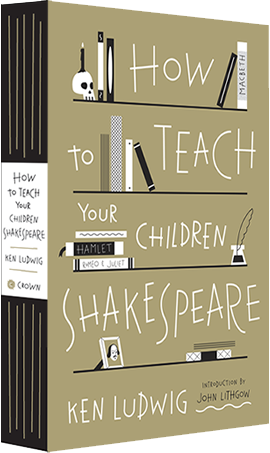 How to Teach Your Children Shakespeare
by Ken Ludwig
New York: Crown Publishers, 2013

I had wonderful English teachers in high school and covered the usual “Julius Caesar,” “Romeo and Juliet” and “MacBeth,” as well as some sonnets. I even had to memorize a few passages along the way, one of which I still remember some twenty-five years later. Yet, the genius that is Shakespeare is not meant to be read – it’s meant to be experienced.

With my children, I have something of an advantage. Their Drama school puts on a Shakespearean production each year, and while they have not been cast in one, we have gone to see them each year. They have already enjoyed “A Comedy of Errors,” “Hamlet,” and “Cymbeline.” I confess I look at Sparknotes before going to have some idea of what is going on, but the shows are of excellent quality and have given my children a true appreciation for the Bard. As for me, I tend to walk around thinking in iambic pentameter for a few days after seeing a production. Being around Shakespeare just makes one feel smart!

That’s why I was eager to read “How to Teach Your Children Shakespeare” by Ken Ludwig, an internationally acclaimed playwright. Ludwig taught his children to love Shakespeare by having them memorize and act out certain passages as they were growing up. In this book, he explains each of those passages in great detail, but he does not stop there. He also provides a great deal of background information on the plays and Shakespeare himself. As an adult, I have a much greater appreciation for Shakespeare now that I have read this book. I think that is the beauty of “How to Teach Your Children Shakespeare.” Not only does it provide a roadmap for teaching one’s children and spending quality time with them in the process, but it also educates the parents, unless of course you already happen to be a Shakespearean scholar, in which case, you probably don’t need this book. For the rest of us, however, this is Shakepeare as we have never encountered it.

I could definitely see this book being used as part of a homeschool English program for middle school or high school. The corresponding website http://www.howtoteachyourchildrenshakespeare.com/ has printouts and audio to augment the text.