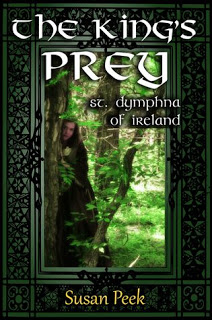 St. Dymphna of Ireland, the patron saint of those suffering from mental illness, hears a lot from me. I ask for her intercession daily both for myself and for several people I care about. For this reason, I was excited to read The King’s Prey, a fictional telling of her life story by Susan Peek. 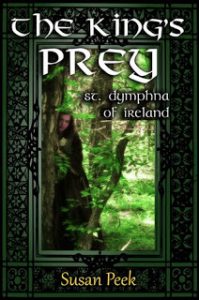 Very little is known about the real-life St. Dymphna. She was an Irish princess who had taken a vow of chastity as a young teenager. When her mother died, her father became mentally ill and started pursuing Dymphna, wanting her to become his wife in place of her mother.  Dymphna ran away with the help of Father Gerebernas and the “king’s fool,” but the king was ultimately able to hunt her down and martyred her.

Peek has taken the bones of this story and expanded upon them greatly. The “king’s fool” has been transformed into Briocc, a harpist, who suffers from post-traumatic stress disorder due to his family’s death, being abandoned by his brother, and a wolf attack when he was young. Peek’s realistic description of this young man suffering from mental illness is skillfully portrayed.

His older brother, Turlough (the one who had abandoned him because he couldn’t take care of him) is one of the king’s soldiers. The tension between the two brothers adds much to this story.

Dymphna herself comes across as a real-life young woman, striving to be holy, but also simply trying to survive.

The King’s Prey is a compelling adventure story which will appeal to both teens and adults. While Peek recommends the book for ages 16 and up due to the thematic material, I feel comfortable recommending it for any high school aged student.

Purchase The King’s Prey (or any other item) after clicking this Amazon link and help support this site: https://amzn.to/2GE9qLC