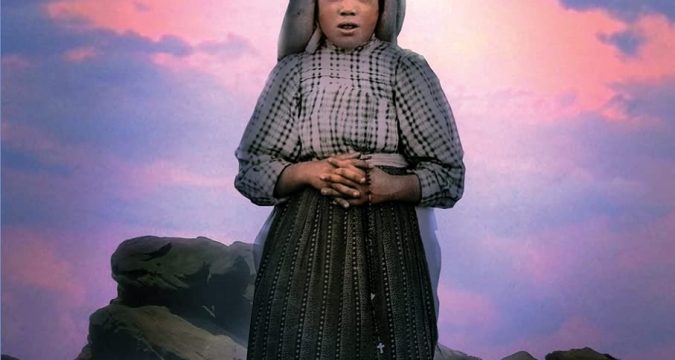 October 13th is the anniversary of the Miracle of the Sun at Fatima in 1917. Lucia of Fatima by Kathryn Swegart is a new book that focuses on the eldest of the three Fatima visionaries.

In the Prologue, Pope Benedict XV prays in the midst of World War I. He sends letters to all the bishops begging people to pray a novena to Our Lady Queen of Peace. The novena began on May 6, 1917. On May 13th, the eighth day of the novena, Our Lady first appeared at Fatima.

The story begins in 1916 when Lucia dos Santos and her two cousins, Francisco and Jacinta Marto, are visited by the Angel of Peace. The following May, these same three children would be visited by the Blessed Mother while tending their sheep in the Cova da Iria (Cove of Peace). She instructs the children to pray the rosary daily to obtain peace for the world. She also tells them that they will have much to suffer, but the grace of God will be their comfort. She also asks them to come back on the 13th day of the next several months.

When Lucia’s mother hears about the vision, she accuses the young Lucia of telling lies and beats her with a broom. She is also bullied by the neighborhood children. When her local parish priest tells Lucia that she might have been tricked by the devil, Lucia is afraid to go back for June 13th, but she prays for peace and decides to do what the Lady asks.

As the months go on, more and more people come to the Cova to witness the children seeing the Blessed Mother, but opposition grows as well. The local government is determined to prove the children are fakes. The children are thrown in jail for five days and threatened with death by boiling oil, but they stick to their story.

On October 13th, Our Lady performs the miracle that she promised would show everyone that the visions were real. The sun danced in the sky and many people believed in the visions.

Our Lady had said that Francisco and Jacinto would die young; they both were victims of the Spanish flu epidemic. Lucia, however, would live much longer. At the bishop’s direction, she attended convent boarding school and eventually became a nun. In 1935-1941, she wrote her memories of the visions. The story ends in the year 2000, when Lucia was able to attend the beatification of Francisco and Jacinta Marto.

Lucia of Fatima is a wonderful way to introduce your children to the visions at Fatima. It is an excellent book for confident readers to read on their own or to share as a family read aloud.