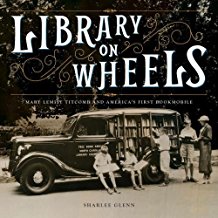 For many years, Mary Lemist Titcomb was an unheralded part of U.S. History. Sharlee Glenn is working to change that. In Library on Wheels, she shares the remarkable story of this brave woman who worked hard to make sure everyone had access to books.

Born in 1852, Mary grew up in a time when farm girls usually only received an eighth grade education, but she begged to go to high school and her parents supported her ambition. When she graduated in 1873, she wanted to find something to do, but didn’t feel called to either nursing or teaching (the two primary careers for women in that era). She read an article in a church bulletin about the new field of librarianship and knew she found her calling.

She served as an apprentice to learn the trade, then went to work at the Rutland (VT) Free Library where she soon became chief librarian. She helped establish several libraries in Vermont, before being asked to become head librarian of the new Washington County Free Library in rural Maryland.

The people of Washington County didn’t know what to make of a library. Many thought it would be a failure. What did farmers and working people need with books? Mary Titcomb was determined to prove them wrong. She later wrote that the library “at once established itself as an educational, recreational and democratizing influence in the community, bringing all classes of people to it.”

Despite the library’s success, Titcomb was not satisfied. The library was meant to serve the whole county, but over half of the county’s residents lived far from town, on farms that were scattered across nearly 500 square miles. She started working with the local schools to make sure they had books. She also set up book deposit stations throughout the county, but there were still some farmers not being reached. In 1905, she decided to create a book wagon, fitted with shelves filled with books, that she could take to the people. Families were allowed to borrow up to thirty books at a time. After the book wagon was destroyed in an accident, Titcomb convinced the board to buy a “horseless carriage” to serve the same purpose. The new book wagon soon became quite famous, and the idea spread to other parts of the country.

Titcomb, however, was forgotten, buried in an unmarked grave in Concord, Massachusetts. After learning of her remarkable life, Sharlee Glenn was determined to rectify that.  The cemetery and Glenn worked together to raise the funds to purchase a headstone which was unveiled on May 16, 2015.

Library on Wheels is an incredible book. While it is a children’s book, it is a must-read for anyone who loves books and libraries or is interested in women’s history.

Order Library on Wheels (or anything else) on Amazon after clicking this link and help support this site: https://amzn.to/2LXf26H