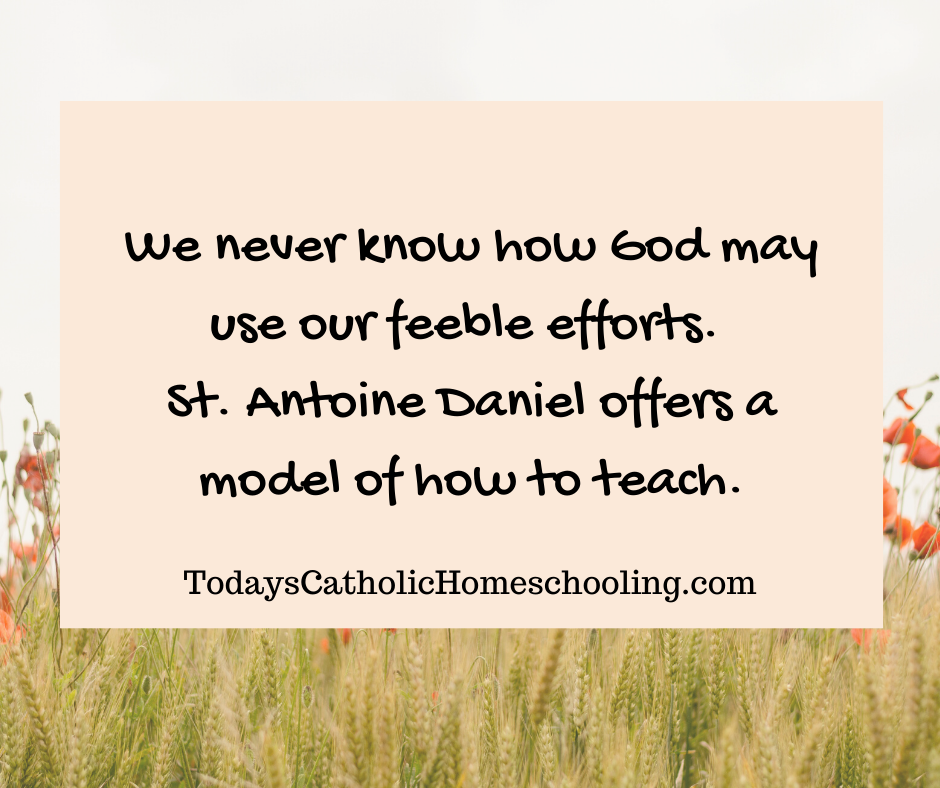 Homeschooling has its ups and downs, its highs and lows. Even when we know this is what God has called us to do, and it’s the right choice for our child at this time, there are days when that child may struggle against us or learning may be hard or other obstacles come up. On those days, I ask St. Antoine Daniel for his intercession on behalf of our homeschool.

St. Antoine Daniel was a Jesuit priest, teacher and missionary. He was born in Dieppe, France, in 1601 and martyred in St. Joseph, New France, in 1649. Most of his forty-eight years were dedicated to teaching young people, whether it was in the colleges of France or the wilds of New France.

Antoine joined the Jesuits at the age of 20 and spent several years teaching at Jesuit colleges before and after his ordination as a priest. It was at the college in Rouen that he met a young Huron boy named Amantacha. The Jesuits missionaries in New France had sent Amantacha to France in the hopes that “if well trained, [he] will be of great assistance in converting the [Hurons].”

Their hopes were well-founded, for Amantacha proved to be a model student. He also inspired in Father Antoine the desire to become a missionary. In 1632, Father Antoine caught passage on his brother’s ship to Cape Breton. A year later, he arrived in Quebec.

There, in order to become a teacher, Father Daniel had to first be a student. Like Amantacha, he proved a quick learner, making “swift progress” with the Huron language (John A. O’Brien, Saints of the American Wilderness). Like St. Antoine, as homeschool moms, we must also be students. We must learn with our children as they learn. We must also learn about them—their interests, personalities, learning styles—so we can better engage them in their learning.

In 1634, Father Antoine arrived in Huronia. Here was his most difficult task, as either student or teacher. He needed to learn the ways of the Hurons, to live with them as they did, so he could teach them the Good News about Jesus Christ. The Huron way of life was very different than what the priests had known in France, and the Hurons were very suspicious of the French and their strange ways.

In France, Father Daniel had lectured aspiring priests on philosophy and theology. In New France, he taught the Huron children to sing the Hail Mary, Our Father, and Apostle’s Creed. O’Brien says that “with infinite forbearance and kindliness the missionary became a favorite with [the children] and made striking headway in acquainting them with the elements of Christianity.” He turned the basic prayers and teachings of the Church into rhymes the young Hurons could chant.

Some of us, as homeschool moms, are questioned about how we can teach our own children without a teaching degree. And some of us, if we do have degrees, are told that we are “wasting” our education by staying home to teach our children. St. Antoine Daniel shows us that the role of a teacher is never wasted. Here he was, a respected Jesuit lecturer from the colleges of France, teaching simple chants to Huron children. He recognized that these children were the future of the Church in New France.

Father Antoine’s success with the Huron children was noted by his superiors, who decided to start a boys’ school. While the Jesuit missionaries wanted greater opportunity to teach the faith, they also hoped that such a school would deepen friendships with the Hurons and build trust.

On the basis of better relationships with the French (their primary trading partners), a dozen Huron parents agreed to send their sons to the school. At the last minute, however, most backed out. Father Daniel’s school was met with more failure than success from its start. There were never more than a handful of boys at the school. They regularly “gave themselves… to thieving, gormandizing, gaming, idleness, lying, and similar irregularities,” according to the Jesuit Relation for the year.

Father Daniel put his all into the students who stayed. Like him, as homeschool moms we don’t need to feel inferior because we “only” teach our own children or teach a few children instead of a classroom. Every child is worthy of care and attention, and every child may make a difference, as Amantacha and Armand did in the Huron missions.

Before starting his school, Father Daniel ran into his first Huron student again. It wasn’t under the best circumstances, however. Amantacha arrived at the mission with a group of fellow Hurons who had just narrowly escaped an Iroquois massacre. How disappointed Father Daniel must have been to learn that, on his return to New France, Amantacha had fallen back into his old ways.

However, his near escape from death had given him a wakeup call. Amantacha attributed his safety to God and became a fervent lay apostle, just as the priests who’d sent him to France had hoped.

Perhaps it was Amantacha’s example that inspired Father Antoine to pour his love and energies into the few students at his school. Two students in particular, Armand and Joseph, showed promise. They worked hard, learning not only their prayers and the doctrines of the faith, but also carpentry, woodcarving, drawing, oratory (public speaking), reading, and writing.

Father Daniel’s school lasted for only two years before it was dissolved. Sickness was again ravaging Huronia, and the priests were handy scapegoats to blame for the death and suffering. To show they meant well and could be trusted, the Jesuits sent Father Daniel, Joseph and Armand back to Huronia. Surely the arrival of the teacher with his healthy, happy students would convince the Hurons that the priests were their friends.

The voyage was not without calamity (both Father Daniel and Armand nearly died on the way), but it was otherwise a success. Father Daniel returned to the work of a missionary, this time at a central location. The Jesuit priests named their new village “St. Joseph” and here, for the next seven years, Father Antoine built a thriving Christian community.

As he stood in the doorway of the chapel on a Sunday afternoon, listening to the bell summoning the Huron parishioners to pray the Rosary, hear a sermon, and receive Benediction, perhaps he thought back to those first years of teaching the children. Perhaps some of his early students were among the converts who now came to Mass twice a day and prayed the rosary together.

As O’Brien notes, he had “accomplished wonders, under adverse conditions, in teaching the words and melodies of Christian litanies in their own tongue—and making them delight in it. … the people would chant these litanies at the top of their voices. Natives who could not be persuaded by an inducement to say prayers, Daniel discovered, would sing these same prayers with gusto if set to rhyme and music.”

We never know how God may use our feeble efforts. Among all the Huron converts in New France, the names of Father Daniel’s students stand out. Both Amantacha and Armand assisted the priests greatly as lay apostles, spreading the word among their own people and refuting the lies that were often whispered about the priests.

With music and love, Father Daniel forever transformed Huronia. In a similar way, we can seek to make the faith—and the other subjects we teach as homeschool moms—interesting and engaging to our children. We can love them and hold onto the cheerfulness that Father Daniel displayed. And we can sing the songs of the Church, the catchy tunes that will stick in our kids’ heads (and maybe be a bit less annoying than other tunes they’ve learned…).

St. Antoine Daniel, pray for us.

Bonnie Way is a homeschool mom with five children ages 12 to 2. She is also the author of North American Martyrs Kids Activity Book, a 135-page book about St. Antoine Daniel and his fellow Jesuit missionaries. This book includes a short bio of each martyr, word searches, cross word puzzles, mazes, writing and drawing prompts, and more to draw kids into the stories of the saints. When she’s not writing or homeschooling, Bonnie enjoys reading, drinking coffee with friends, and hiking or skiing in Vancouver’s mountains.