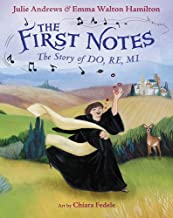 In the classic musical The Sound of Music, Julie Andrews since the song “Do, Re, Mi” to teach the young Von Trapp children how to sing. In a new picture book, The First Notes: The Story of Do, Re, Mi, Andrews and her daughter, Emma Walton Hamilton, share the story of how the musical scale came to be.

Guido was a monk who lived in the early eleventh century at Pomposa Abbey on the Adriatic coast of Italy. He loved music, but at the time it was a challenge to learn new music or to teach it to others. He wondered if there was a way to write music down the way words could be written down in a book. He realized when he was singing that he was only using six basic tones. He began to make marks on a paper to indicate the tones, drawing lines in between them so that they looked like they were climbing a ladder.

He decided the notes needed names. He decided to name them after the first syllable in the lines of a favorite Latin hymn, “Ut queant laxis.” The notes were named “Ut, re mi, fa, sol, la.” Later on, “ut” would be changed to “do” and “ti” would be added. Pope John XIX eventually heard of Guido’s musical notation, which became known as Solfège. It soon began to be widely used, revolutionizing the world of music.

While geared toward younger children, this picture book is lovely for all ages. It is interesting and informative, and the colorful illustrations by Chiara Fedele add to the text. The First Notes would be a wonderful family read-aloud and a perfect addition to any home or school library.

This post contains Amazon affiliate links. Purchases made after clicking a link help support this site. Thank you!