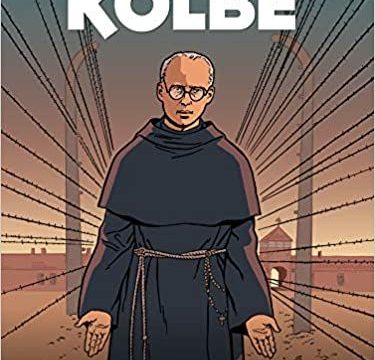 Maximilian Kolbe: The Saint of Auschwitz by Jean-Francois Vivier

This graphic novel by Sophia Press is a fabulous look into the life of St. Maximilian Kolbe. I’ve enjoyed the entire collection of saint graphic novels published by Sophia Press, but this one is my favorite. This one is a more in-depth endeavor, delving into the life of an incredible man. Maximilian Kolbe may best be known for his ultimate sacrifice while held prisoner at a Nazi concentration camp, but this faithful servant did so much for the Church during his life.

This comic-style book takes place during Kolbe’s time at Auschwitz, letting readers experience a bit of the horrors and degradations perpetrated by the Nazis. Through Kolbe’s discussions with his fellow prisoners, we learn about his life and amazing accomplishments. From starting the Militia Immaculatae, his years advancing Catholic publishing, to his missionary work in Asia, Kolbe’s time on this earth, while cut much too short, touched so many as he lived his life for Christ.

Many of the Saints we read about lived centuries before us. While we can learn still learn so much from their fascinating stories, they can feel a bit removed from our lives. That’s why I’ve always found the more modern Saints particularly intriguing. The idea that Saints are still living among us today is a fascinating thought. While the illustrations and text make this biography easy to follow, I especially appreciated the photographs included at the end of the book. The black and white images really added an extra element to this heart-breaking yet inspiring look into Maximilian Kolbe’s life.

It’s July 1941 in the Auschwitz concentration camp in German-occupied Poland. Franciscan priest Maximilian Kolbe steps forward. “Let me take this man’s place,” he says, thereby volunteering to die in the place of a stranger who had just been condemned to death by his Nazi captors. By means of this singular deed, Fr. Kolbe laid down his life not for his friends — as some might do — but for a complete stranger. Those who know little of Fr. Kolbe may dismiss this as an impulsive act, soon regretted. On the contrary — and as these moving pages show — his voluntary sacrifice of his life was, in fact, the crowning achievement of nearly forty years of Christian love, devotion, and, yes, even martyrdom that he had freely and deliberately agreed to accept when he was only twelve years old. In the decades leading up to his generous self-sacrifice in Auschwitz, Fr. Kolbe became a monk; earned a doctorate in Rome; taught seminarians in college; established what soon became a thriving religious order (the Militia Immaculate); founded a popular religious magazine, a monastery (where, before his arrest, he hid thousands of Jews from the Nazis), a religious radio station, and a wartime hospital; and even created and served as publisher of the largest religious newspaper in Europe, whose many issues opposed Nazi evil and were circulated to readers throughout the Continent. Not satisfied with all that, Fr. Kolbe traveled with a few companions to Nagasaki, where he set up a monastery to serve the Japanese people. All that in a brief life of forty-seven years! A rich, holy life told in vivid images and exciting details in this page-turner of a biography.

Purchase Maximilian Kolbe: The Saint of Auschwitz by Jean-Francois Vivier on Amazon.