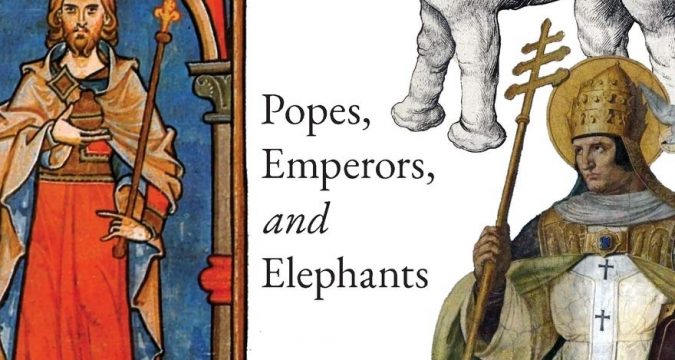 Popes, Emperors, and Elephants: The First Thousand Years of Christian Culture by Roy Peachy is written in a conversational style which can be enjoyed by middle schoolers through adults.

Peachy begins by discussing what “history” itself means and how different cultures have had different understandings of “history.” He then turns the reader’s attention to the Greeks and Romans and the role Jews and Christians played in the Roman Empire. There is a chapter on relics and another chapter on how the Bible was developed. He also discusses on Christianity spread.

Some of the other topics Peachy touches on include when the Roman Empire truly ended, family life, architecture, the development of the Catholic Mass, the rise of Islam, Charlemagne, the Vikings, how the concept of zero was developed, and the reasons why he stops this book at the year 1054.

Popes, Emperors, and Elephants would be a great supplement to your history studies. The chapters are short and could be read aloud in a family. It is a fun, interesting read, sure to pique the interest of even those who don’t relish studying history. Reading about some of the topics may even encourage students to want to learn more about them. I do wish the book had some illustrations to supplement the text. Even without them, however, this romp through the first 1000 years of Christian Culture has much to offer!

This post contains Amazon affiliate links. Purchases made after clicking on a link help support this site. Thank you!