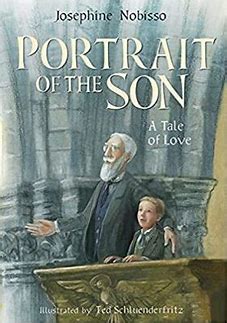 Portrait of the Son: A Tale of Love by Josephine Nobisso is a follow-up to her much-loved picture books The Weight of a Mass: A Tale of Faith and Take it to the Queen: A Tale of Hope. Anyone who enjoyed those stories will want to add this one to their collection. (If you haven’t read those two stories, I highly recommend them!)

In this tale, the richest man in the world amasses the most amazing art collection. His love of art is only surpassed by his love for his son, who shares his father’s love of beauty. The son grows up and goes off to fight in a war for three years. When the father receives word that he has been killed, he locks himself away to be alone in his grief. Three days later, a wounded soldier arrives at the father’s doorstep. He had known the son in battle and spoke highly of him. He also gave the father a portrait he had painted of the son. While the painting might have little artistic value, it has great sentimental value, and the father hangs the portrait in the place of honor in his home.

Years go by, and the father decides to auction off his artwork. The world’s collectors are eager to get their hands on the valuable art, but the first painting to be auctioned is that of the son. The art buyers scoff, but a poor beggar offers all he has to buy the painting. In doing so, the beggar becomes the owner of all the priceless art.

An author’s postscript beautifully explains the meaning of the allegory and provides layers of meaning that one might not necessarily get at a first readthrough. The inside of the jacket of the book also describes the meaning behind the illustrations created by Ted Schluenderfritz. Portrait of the Son is a book to be treasured again and again.

This post contains Amazon affiliate links. Purchases made after clicking on a link help support this site. Thank you!