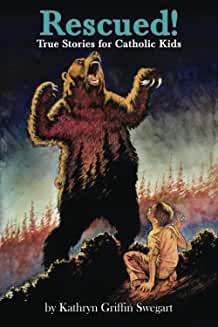 Have you ever had the experience of being inexplicably rescued from a dangerous situation? Author Kathryn Griffin Swegart OFS has. She was saved from certain death in the midst of a tornado, a rescue she credits to her guardian angel.

In Rescued: True Stories for Catholic Kids, Swegart shares stories of supernatural encounters with angels or heroic people who put themselves at great risk to save the lives of others. While these stories are aimed at kids in the 8-12 year-old range, adults can appreciate them as well.

Some of the stories included are the biblical story of St. Peter being rescued from prison by an angel, St. Patrick who was being held as a slave in Ireland and was led by God to escape to a ship 200 miles away, the miraculous rescue of a ten-year-old boy in an earthquake in 1915, two German soldiers saved during World War II, and the protection of St. John Paul II by the Blessed Mother when he was shot in 1981. My personal favorite story is about the incredible abilities of a St. Bernard dog working to save pilgrims in the Alps in 1805. In all, ten incredible rescues are included. Each story is short, perfect for a quick read in the morning or before bed.

One of the most interesting features of the book is the “Facts Behind the Stories” included at the end of the book. In that section, Swegart includes extra information that didn’t fit well in the retelling of the stories but is often just as fascinating.

Rescued: True Stories for Catholic Kids is the third book in the Catholic Stories for Kids series. The other books are Miraculous: Catholic Mysteries for Kids and Heavenly Hosts: Eucharistic Miracles for Kids. All three are wonderful and would be a great addition to any home, parish, or Catholic school book collection.

This post contains Amazon affiliate links. Purchases made after clicking a link help support this site. Thank you!