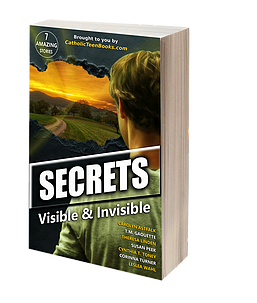 Earlier this year, the writers from CatholicTeenBooks.com released Secrets: Visible and Invisible, a collection of short stories. At the time, my reading pile was too high to get to read it, so I simply shared information about the book for anyone who was interested. Recently, they contacted me and asked if I had time to read it now. I’m so glad that I did. Secrets is an incredible collection of stories by a group of talented Catholic writers.

The Unappreciated Virtues of Rusty Old Bicycles is a high-stakes dystopian story by Corinna Turner. Margo and Bane are running away from a military train when Margo gets shot in the arm. They hide, trying to escape being arrested and possible dismembered.

Recreation by Cynthia Toney tells of a teenager who befriends an older woman and learns some valuable lessons in the process.

Theresa Linden offers The Portrait of the Fire Starters about a youth prayer group. When a mysterious portrait of them appears and then changes every time they see it, the group searches to uncover who is painting the portrait and what is the meaning behind it.

In On the Brink of Hell, Susan Peek takes readers back into the 16th century Italy. Dario is a mercenary soldier who has lost his legs in battle and fears he is going to hell in a powerful story of God’s mercy.

Sr. Francesca by T.M. Gaouette features a young woman who wants to be a nun and the young man who is enamored with her in an unusual love story.

Behind the Wheel by Carolyn Astfalk tells of a high school sophomore without a driver’s license who “borrows” his father’s truck to go see a girl. Needless to say, the night does not go as he hoped.

In More Precious than Gold by Leslea Wahl, four teenagers are working at a camp for disadvantaged kids. While there, they try to reach a young boy whose brother was recently murdered as well as uncover an unsolved mystery.

Secrets, which recently received the Catholic Writer’s Guild Seal of Approval, is enjoyable Catholic teen fiction, entertaining and thought-provoking. Those who have read other works by these writers may recognize some of the characters. Those who have not already been introduced to these writers’ novels may very well be inspired to pick up a few.