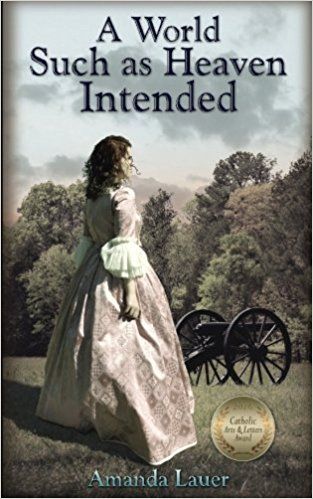 A World Such as Heaven Intended by Amada Lauer

This is a sweeping love story set during the darkest time of our nation’s history – the Civil War. Ever since I was a little girl and watched “Gone with the Wind”, I’ve had a bit of a fascination with this era. Back then it was the beautiful gowns and huge plantation houses that I found fascinating. But since then I’ve visited several Civil War battlefields and the stories of the horror that unfolded on them, between fellow countrymen, is unfathomable.

A World Such as Heaven Intended (such a beautiful title) is about Amara, a young lady living in Atlanta who decides to help her Uncle and the confederate soldiers at his makeshift hospital. One of her patients is a handsome young soldier named Nathan, who was forced into service for his country.

This book does a wonderful job of showing several difficult aspects of the war. Through Amara, we see the tragedy of the injuries and the unthinkable medical conditions at that time. Nathan shows us how the lines of good and bad could easily be blurred. It’s easy now to look back at the Civil War and break it down to a discussion on slavery but it’s not that simple. Seeing the conflict from the perspective of these two individuals highlighted that point.

I especially enjoyed the interaction between Amara and Nathan, especially in the second half of the book. Amara’s strong will and Nathan’s sarcasm made for some fantastic scenes that made me laugh out loud. This is a fabulous book that will sweep you away and provide some important discussions.

A World Such as Heaven Intended (Book One) Amara McKirnan and Nathan Simmons share a devotion to their Catholic faith but their loyalties lie on opposite sides of the Civil War. Dedicated to the Confederate cause, Amara offers to help out at her uncle’s makeshift hospital in Atlanta. Fate brought Nathan to their doorstep and into Amara’s life. Little does Amara know that the wounded soldier she cares for harbors a secret that will not only jeopardize his life but hers as well.

Follow Amara and Nathan’s story from the heart of war-torn Atlanta to the Northern Georgia battlefields to the plains of East Texas as their lives become intertwined in a way that shatters the separate worlds they once knew.