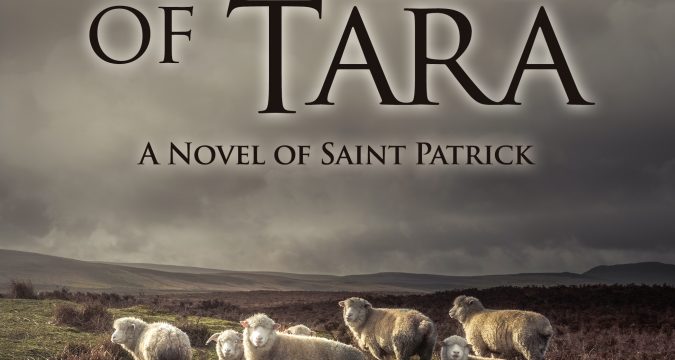 While the Roman Empire crumbles into chaos, the flickering light of civilization is in the hands of a teenage pig-keeper and shepherd at the edge of the known world. His name is Succat. We know him as Patrick.

As an indolent teen, Patrick is abducted by pirates from his British villa and sold to a druid chieftain in remote Hibernia.  In misery, he embraces the faith he once loathed. He learns Irish language and lore, befriends the chieftain’s son and falls for the feisty daughter, making a jealous enemy of the druid’s apprentice. Fearing for his life and obeying a strange vision, Patrick escapes, leaving the girl he loves and returning home after a hazardous journey. But he is shaken by an insistent dream: the plea of the Irish to come back.

He resolves to do so. But first he must overcome a suspicious church, a backstabbing mentor, and his old rival who is now the Archdruid of Ireland, sworn to kill him and eager to enslave the beautiful woman Patrick left behind.

Can he save Ireland from darkness—and free the girl he once loved?

“Full of action and intrigue yet true to historical detail.”

—Lisa M. Hendey, author of The Secret of the Shamrock

John shares what inspired him to write this work of historical fiction:

Writers can be inspired by a time, a setting or a character. For me, it was all three.

I had written The Throne of Tara: A Novel of Saint Columba in 1990, after scripting and producing a documentary about Church history. I became fascinated by Irish monasticism and Celtic spirituality, by the monks’ love of scholarship, prayer, and poetry, and by their ardent evangelization. Soon after that book was published, I wondered if a “prequel” of sorts, a book about Patrick, might be a natural follow-up. After all, I’d already done a lot of research into the general period and the culture. I turned to contemporary mysteries instead. But I saved my notes.

So, nearly 25 years later, I picked it up again. I wanted people to know “St. Patrick’s Day” was more than beer, corned beef’n’cabbage, a green river in Chicago and a parade in New York to celebrate Irish identity. The historical Patrick was a revolutionary figure. Against tremendous odds, he persevered in faith to bring God’s message of forgiveness to his former captors (he’d been kidnapped by Irish pirates as a teenager in Britain but escaped after 6 years). This was a time in Church history when such evangelization across cultural lines—certainly outside the Roman Empire—was not really known. The Church was preoccupied with combating heresies and with managing a chaotic, crumbling Empire, as many bishops became the defacto governors of their districts while “barbarians” ravaged the land. There was little interest in ‘evangelizing’ the so-called barbarians when bishops were more busy ransoming Christian captives from them.

Patrick’s daring and determination were inspiring, and more so, his long obedience to an insistent call—against his better judgment—to return to the people who brutally enslaved him in order to bring them the gospel of true freedom. Another person might have hated them for that bitter bondage. But he loved them. He knew their language and their lore, which he realized pointed to Christ. One of their great heroes, Cuchulainn, was bound to a post with a hawthorn crown and was lanced in his side while being mocked by pagan priests. Who does that sound like?

Historical fiction can be escapist by transporting readers to a distant time and place in an entertaining way (and even provide some knowledge). But it can also engage readers to think about the present time, and to see how people in the past met similar challenges. Patrick’s bold willpower—and submission to God’s will—advanced the light of the Faith and preserved the lamp of learning at a time when barbarians burned the libraries of Europe and plunged the Continent into a Dark Age.

Purchase The Light of Tara on Amazon (Affiliate link – purchases made after clicking the link help support this site.)