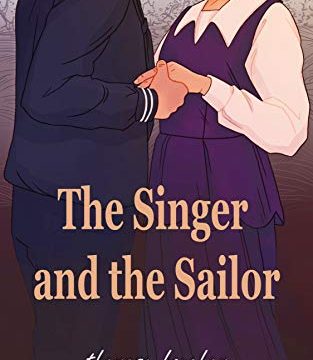 Therese Boucher provides a poignant portrait of early 20th century life for Catholic French-Canadian immigrants in central Massachusetts in The Singer and the Sailor. When the story opens, Rosalie Demers is saying goodbye to her fiancé Warren who is leaving to fight in World War I. It then pivots to share the tale of their growing up, meeting, and eventual romance.

Boucher captures the challenges of being poor immigrants who had to leave school to go to work in the mills at a young age and their efforts to make their place in the world. The story is set against the events going on in the larger world that eventually led to the United States’ involvement in World War I. Boucher also portrays some of Warren’s experiences in being in the Merchant Marines.

The Singer and the Sailor is based on a true story. As someone of French-Canadian ancestry who lives in Massachusetts, it was easy for me to imagine my grandparents in this tale. Any teen who enjoys historical fiction with a side of romance will appreciate and learn from this story.

This post contains Amazon affiliate links. Purchases made after clicking through help support this site.