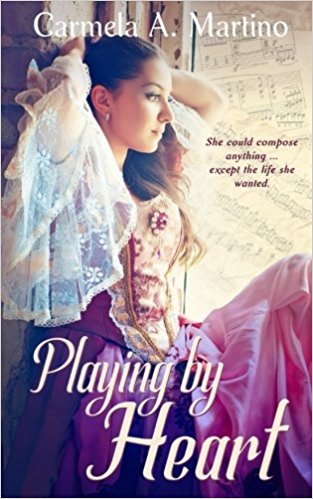 Looking for some inspiring, enjoyable Catholic fiction for

your teenage daughter? Playing by Heart by Carmela Martino may be just what you are looking for. Maria and Emilia Salvini are two gifted teens growing up in 18th-century Milan. In one way, they have been extremely blessed in that their father believed in educating girls. Her father’s favorite, Maria is fluent in several languages and is often called upon to recite orations at her father’s intellectual parties. Emilia has the gift of music and loves to both play and compose. She is her mother’s favorite, but has always lived in her sister’s shadow. On her deathbed, Emilia’s mother makes her promise she will care for her more fragile older sister, a promise she will struggle to keep.

Maria wants to become a nun, but her father forbids it because he does not want her talents hidden in a convent. Emilia on the other hand is terrified that she will be forced to join a convent due to a lack of dowry. She wants to be married, especially after she falls in love with another promising musician. But, the path of true love never did run smooth, and her father, who has aspirations of becoming a count, plans to marry his two older daughters to nobility even if the nobles are less than honorable. Can they possibly convince their father to let them choose their own lives?

Martino is a talented writer whose words bring these two young ladies to life. One can almost hear Emilia’s music emanating from the page. This well-researched novel will leave you feeling like you time-traveled to 18th century Italy, but Playing by Heart’s story of young women trying to fulfill their potential and find their place in the world is timeless.

Purchase Playing by Heart (or anything else) on Amazon after clicking this link and help support this site: https://amzn.to/2Kpa1Cu